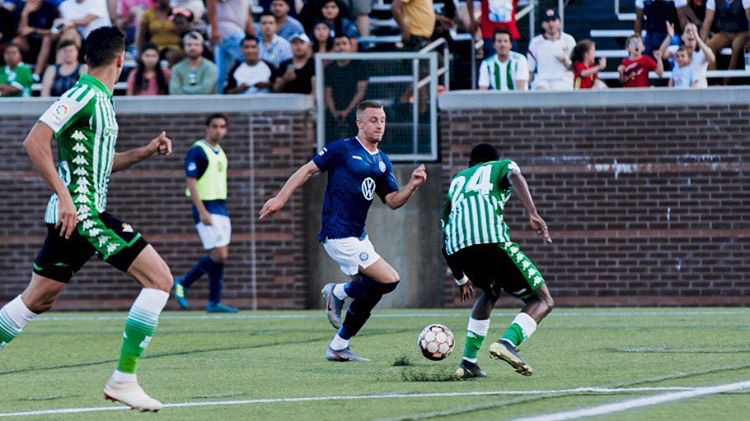 The experience of playing “Soccer” in the USA is like nothing else; the interaction with the fans, the culture, and the way the game is played. I’ve played for AFC Bournemouth, and a number of teams at the top of non-league but when I compare that to playing in New Orleans, LA and Chattanooga, TN it doesn’t really compare.

The first time I got a taste of playing in the USA was during the off season when I was at Bournemouth and coming back from injury. I signed with the New Orleans Jesters in the NPSL. It was a mixture of some of the best College/University players and a number of English players trying to keep fit out of season or trying to make it in the USA. From then I’ve played in the USA nearly every summer since. I’ve played for Chattanooga FC, and New Orleans Jesters, playing in front of thousands each week, instead of hundreds in non-league. All of the pitches that we played on were either 3G/4G or immaculate grass pitches, again slightly different to a lot of non-league pitches during the winter, even at conference level.

I played with and against some fantastic players, we even played against Real Betis of La Liga in pre season losing only 4-3 to a starting 11 that included Joel Robles, Joaquin, Marc Bartra, and Javi Garcia. That game was played in front of a packed crowd, and was a fantastic experience.

Particularly with the New Orleans Jesters, where I played for a number of years, I began to recommend the experience to some of the teammates I played with at Bournemouth, and Chad Collins who was the goalkeeper, also joined me for the 2017 & 2018 seasons. I have also looked in to playing at the University level in the USA on the back of my experiences during the summer, although I was too late and wouldn’t have been eligible because of contracts I’d signed with clubs in England, as it is difficult if you’ve signed a professional/semi-professional contract.

For any players that are currently playing at professional academies and aren’t fortunate enough to be offered professional deals. I would strongly urge you to consider the USA as an option, playing for 4 years at a very high standard and with all of the opportunities that come with it, as well as the education.

If you want an informal chat about our services, or you have questions about the sports scholarship process, get in touch, we’d be happy to help you through your scholarship journey.